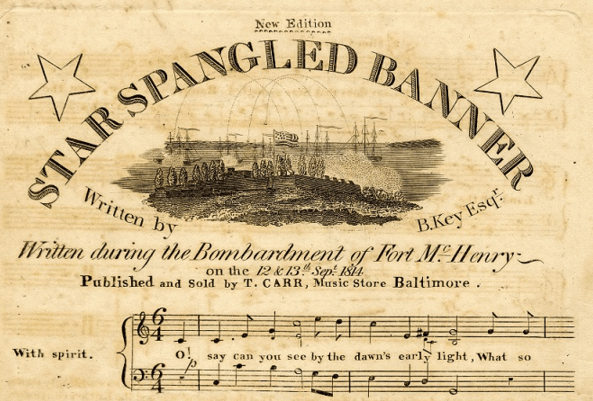 The story of the American anthem finds its roofs in a war that took place two centuries ago, during which the new-born American nation wanted to obtain its complete independence. In fact, during one of the many fights of this war, a young citizen of Washington, a lawyer called Francis Scott Key, became so amazed at the sight of the star-spangled banner that created a poem about it. This sonnet is the one that we usually hear singing by the Americans in a glorious way the moment they win a football match, a competition or when there are important events. In fact, this poem became in the 20th century the American anthem. 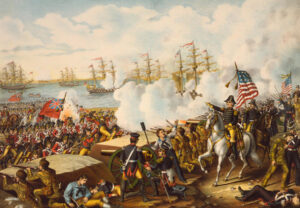 The Anglo-American war, also known as “the 1812’s war” because of the year it started, is remembered by many historical as the second independence war since it was declared by the United States of America against the United Kingdom with the aim of claiming their rights. At the beginning of the 19th century the Great Britain was leading a war against France, commanded by Napoleon Bonaparte, in which the French nation was putting the hope for a political and social stability after the French revolution. To combat the expansionist desire of Napoleon the United Kingdom had imposed a naval blockade, one of the main reasons of the Anglo-American war. In fact, according to the naval blockade the Great Britain stopped every state, including the United States, from trading with France. With this blockade the Royal Navy impoverishing the American trade since it couldn’t develop and it gave Britain the possibility of hiring new seamens according to the English citizen. On the 18th of June 1812, therefore, started the Anglo-American war, faced on three different sides: in Canada, to the West against Indian nations that were allied with the United Kingdom and at the sea, mastered by the Royal Navy. This war lasted continuously three years, until the 17th of February 1815, when the last fight took place in the city of New Orleans. In reality, this war ended up on the 27th of December 1814 with the Treaty of Ghent. According to this treaty, the war’s result was status quo ante bellum.

One of the many tactics used by the English army consisted of landings on the American continent where English soldiers bombarded or gave fire to buildings like the one that today is known as the White House. The bombing that happened on the 13th of September 1814 in Baltimore was the one that inspired the young lawyers Francis Scott Key in his poem, which became, through the years, the American anthem. At that time Baltimore was one of the richest cities in America so for this reason it was an important aim of the English army. At six o’clock on the 13th of September 1814 the Royal Navy started a bombing, that lasted 25 hours, over the Fort Mc Henry. Fort McHenry was placed near Baltimore’s harbor and was in the form of a pentagon; in 1789 it was built with the aim to defend the city from enemies. The fort’s name comes from James McHenry, the first American statesman that became the first secretary during the independence war. Because of the poor rocket and cannons’ precision of both sides the fort didn’t crumble. However, American managed to combat enemies’ bombing using their weapons.

But the question is, how did this bombing inspire Francis Scott Key?

The thirty-five years old lawyer Francis Scott Key, who came to Baltimore in order to trade the release of a doctor called William Beans, watched the 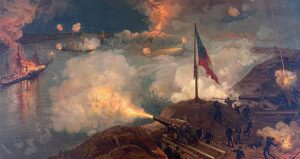 bombing of the fort from a ship for the entire day. The fact which inspired the young lawyer was the sight of the flag that was waving on the fort, as if it was unaware of the facts that were going on around it. The flag whose Francis written about was commissioned to a tailor called Mary Young Pickersgill by George Armistead, the American commander of the infantry and artillery that had to defend the fort. The flag that was created by this tailor included 15 cotton stars and 15 woolen stripes for each state that was part of the United States of America. Overall, the flag was 30×42 feet (9×12 meters) and was called “The Star-Spangled Banner”, the same name with which Francis Scott Key’s poem was then indicate.

On the 16th of 1814 the lawyer Francis ended his poem in the Indian Queen Hotel where he was staying; then he called his sonnet “Defense of Fort McHenry” and he published it on The Analectic Magazine. Later Francis gave his brother-in law his poem ande he realized that Francis’ work perfectly adapted to The Anacreontic Song’s melody, created by the English John Strafford Smith. From that moment, Francis’ sonnet, with its melody, was published on many magazines. But one day an English composer called Thomas Carr, the owner of a music’s shop, published Francis’ poem calling it “The Star-Spangles banner” despite its original title.

With this publication, through the years the sonnet of Francis became very famous in America; everyone could learn that by listening it in various event such as on the 4th of July, the day when the American independence is remembered. Then, was decided that this poem had to be adopted by the army and that it had to be sang in each important event and also during parades. Because of the importance that this sonnet acquired through the years on the 10th of April 1918 John Charles Linthicum, Maryland’s representative, introduced a law in order to adopt The Star-Spangled Banner as the national anthem. However, this law wasn’t approved. Only thirteen years later, on the 4th of March 1931, the law was approved by the president Herbert Clark Hoover. From that moment on The Star-Spangled Banner was recognized as the national anthem of the United States of America.

Oh, say can you see, by the dawn’s early light,
What so proudly we hailed at the twilight’s last gleaming?
Whose broad stripes and bright stars, through the perilous fight,
O’er the ramparts we watched, were so gallantly streaming?
And the rockets’ red glare, the bombs bursting in air,
Gave proof through the night that our flag was still there.
O say, does that star-spangled banner yet wave
O’er the land of the free and the home of the brave?

On the shore dimly seen through the mists of the deep,
Where the foe’s haughty host in dread silence reposes,
What is that which the breeze, o’er the towering steep,
As it fitfully blows, half conceals, half discloses?
Now it catches the gleam of the morning’s first beam,
In full glory reflected now shines in the stream:
‘Tis the star-spangled banner! O long may it wave
O’er the land of the free and the home of the brave.

And where is that band who so vauntingly swore
That the havoc of war and the battle’s confusion
A home and a country should leave us no more?
Their blood has washed out their foul footsteps’ pollution.
No refuge could save the hireling and slave
From the terror of flight, or the gloom of the grave:
And the star-spangled banner in triumph doth wave
O’er the land of the free and the home of the brave.

Oh! thus be it ever when freemen shall stand
Between their loved homes and the war’s desolation!
Blest with vict’ry and peace, may the Heaven-rescued land
Praise the Power that hath made and preserved us a nation.
Then conquer we must, when our cause it is just,
And this be our motto: “In God is our Trust.”
And the star-spangled banner in triumph shall wave
O’er the land of the free and the home of the brave! 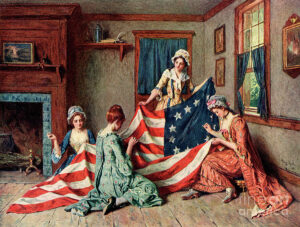 From the first verses we can notice what deeply amazed Francis Scott Key in his sonnet: the flag’s grandeur that waving on the fort while is enlightened by sunrise’s light and while it seems unaware of the noise of cannons and bombs. And it is in this flag where American identify themselves, find a safety and the courage to keep fighting. The star-spangled banner brings light on them, it offers them a hope in which believe; it becomes a sort of divine sign that watches over them. No wonder if this poem obtained immediately a lot of success among the American nation. In fact, after many years of fights carrying out with the aim of obtain their rights as independent and free citizens, there was an essential necessity: find their identify and create their beliefs. This necessity was important to give birth to a real nation. The identify of this nation can be noticed in the common sense that unites each brave citizen, who is determinates to fight for his own independence. This common sense emerges in a verse of Francis’ sonnet: “O’er the land of the free and the home of the brave!”; and this is the common sense in which the American nation identify itself even today. 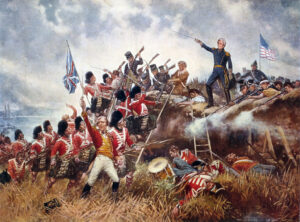 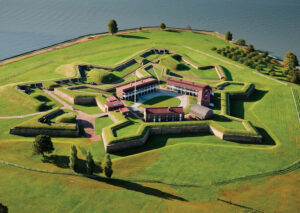 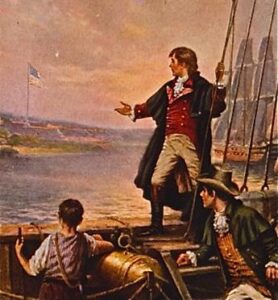