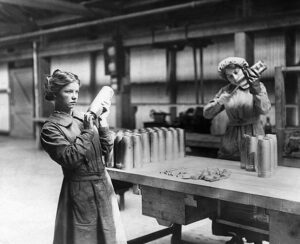 “Canary Girls” was the name given to British women who worked in munitions manufacturing trinitrotoluene (TNT) shells during the First (and Second) World War.
The nickname was chosen because repeated exposure to TNT is highly toxic and can turn the skin a yellowish colour, reminiscent of the plumage of canaries.

Since most working-age men were joining the military, women had to take on the factory jobs that were traditionally held by men. Women responded to the call of need the country was displaying by stepping up to fill those positions. By the end of the war, there were almost three million women working in factories, around a third of whom were employed in the manufacture of munitions. During the war period most of the factories were ammunition factories. Working conditions were often extremely dangerous and the women worked long hours for low pay. Munitions work involved mixing explosives, and filling shells and bullets. Munitionettes manufactured cordite and TNT, and those working with TNT were at risk of becoming “Canary Girls”: they were exposed to toxic chemicals that caused their skin and hair to turn yellow.
“We were like a canary,” said Nancy Evans, recalling her time at the Rotherwas factory in Herefordshire during World War Two. “We were yellow, it penetrated your skin. Your hair turned blonde and on the top of the crown was the proper colour of your hair”.
Shells were filled with a mixture of TNT (the explosive) and cordite (the propellant); these ingredients were known to be hazardous to health, but they were mixed by hand the same, so they came into direct contact with the women’s skin. The chemicals in the TNT reacted with melanin in the skin to cause a yellow pigmentation, staining the skin of the munitions workers. Even though it seems so, this was not dangerous and the discolouration eventually faded over time with no long-term health effects. The problems were others: working with TNT powder led to anaemia and jaundice because of liver toxicity. The body’s reaction to to the TNT usually began with sneezing fits, a bad cough, severe sore throat and profound digestive woes. Some women said the worst of it was the constant metallic taste in their mouth. This condition, known as “toxic jaundice”, gave the skin a different type of yellow hue. Four hundred cases of toxic jaundice were recorded among munitions workers in the First World War, of which some ended to be fatal.

According to Dr Helen McCartney, from King’s College London, some workers gave birth to “bright yellow” babies. Gladys Sangster, whose mother worked at National Filling Factory Number 9 near Banbury, Oxford, was one of them. “I was born and my skin was yellow, that’s why we were called Canary Babies. Nearly every baby was born yellow. It gradually faded away. My mum told me you took it for granted, it happened and that was it”. Hundreds of “Canary Babies” were born with a slightly yellow skin colour because of their mothers’ exposure to dangerous chemicals. Nothing could be done for the babies at the time, but the discolouration slowly faded with time.

A medical investigation was later carried out by the government (1916), to study the effects of TNT on the munitions workers. The investigators acted as female medical officers posted inside the factories. They found that the effects of the TNT could be roughly split into two areas: irritative symptoms, mainly affecting the skin, respiratory tract, and digestive system; and toxic symptoms, including nausea, jaundice, constipation and dizziness. Those who worked in the munitions factories also reported headaches, nausea and skin irritations such as hives. As a result, factories were forced to improve ventilation and provide the workers with masks. Despite those improvements, the same story was repeated in WW2: female workers were also at serious risk from accidents with dangerous machinery or when working with highly explosive material again.
Former WW2 munitions worker, Gwen Thomas from Liverpool remembered her work vividly: “…there was no training. You were put into what they called small shops where they made different sizes of shells and landmines and different things like that…you were just told what you had to do, filling them with TNT. And there was a lot involved in doing them, and they had to be filled to a certain level and then you had to put a tube in which was going to contain the detonator. Then it had to be all cleaned and scraped until it was exactly the right height inside the shells or the mines. It was quite heavy work actually because they used to have like a big cement mixer, type of thing and this was hot TNT. The smell was terrible and you had to go to that with something like a watering can, and take it up. There was a chap on it who used to tilt it and fill your big can, and you’d have to carry that to where you were working and then fill the shells from that. I slipped on the floor with one of these big cans and I was covered in TNT. My eyes were concealed and everything, up my nose, it was everywhere. Some of the chaps that were working there got hold of me and put me onto a trolley and took me down to the medical place and obviously I had to wait for it to set on my face. I had quite a job getting it off my eyelashes, you know and that sort of thing. And of course my face then was red and scarred with the hot TNT, you know. They put me on the bed for an hour or something, and then it was straight back to work after that”.

Women were shackled by the thought of their husbands relying on the ammunition and weapons they were producing. Despite the deplorable working conditions they had to keep going if they wanted their husbands as well as sons to come home as soon as possible.

But why did their skin turn yellow? Many women worked with trinitrotoluene (TNT), which is used in the manufacture of explosives, and cordite, which is used as a propellant in cartridges. When cordite is fired, the expanding gases propel bullets and shells out of the cartridge and out of the barrel. The manufacture of both TNT and cordite involves such corrosive substances such as sulfuric and nitric acid. Fumes from these acids turnes skin and hair to a yellow color.
When you drop nitric acid on your skin or nails, it turns yellow after a bit. The finger nails show a bright yellow colour (finger nails are made up of keratin-a protein) which cannot be scraped off, unlike the yellow colouration on the skin which can be peeled off. Further, if you eat TNT, your pee will turn red and look like blood, though it is not.

TNT Will Turn Your Skin Yellow